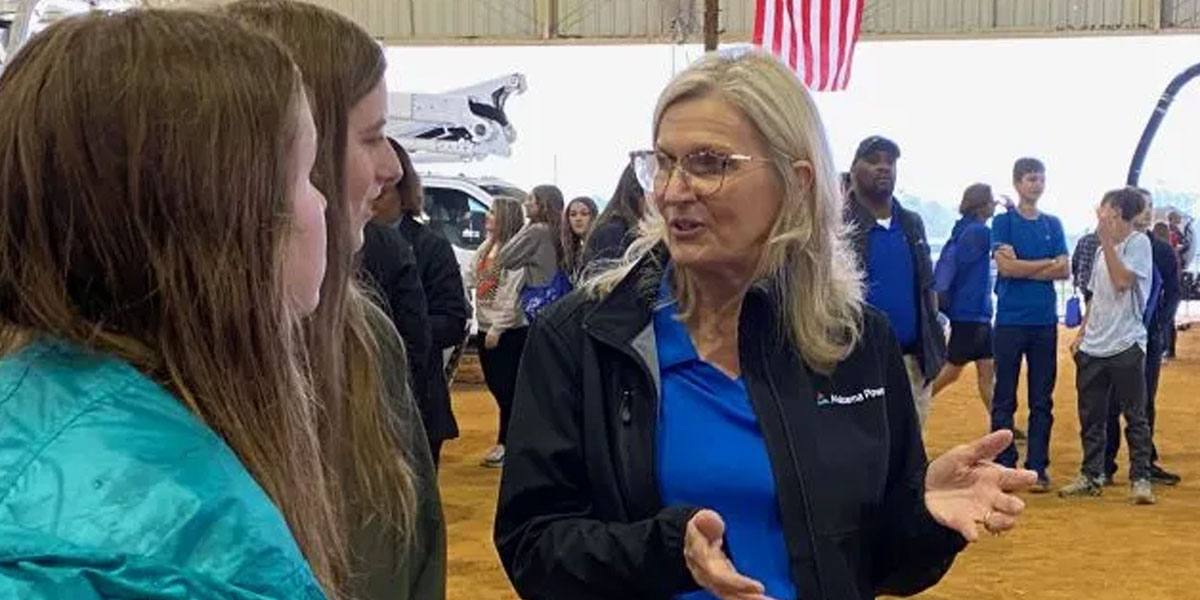 Company director prepares future employees while giving back to the community

In a 31-year career filled with twists and turns, Ginger Dean’s path has come full circle, with engineering bringing her home to the Dothan region.

After earning a degree in electrical engineering at Auburn UniversityDean began his career with Alabama Power at Farley Nuclear Generating Station in Dotan. It’s a small coincidence that Dean worked at Plant Farley for seven years, then held seven other positions around the state, finally returning to his old stomping ground in January 2009.

It’s at home — as a power delivery and distribution manager at Alabama Power’s corporate office in the Southeast Division — that Dean is making strides in preparing for the next generation of employees. Dean, one of 86 female Power Delivery engineers at the company, is keen to inspire young people to get into the field.

It is part of Dean’s supervisory role to consider hiring needs. To provide reliable electricity now and in the future, Alabama Power must hire well-trained employees to perform highly technical work.

To that end, Dean was among a small group of employees who represented Alabama Power on March 9-10 at the Southeast Worlds of Work (WOW) career fair in Dothan. The team discussed engineering and utility work with eighth and high school students. Along with employees from four other utilities, Dean and his team spoke one-on-one with students.

His organization recently interviewed a young man for a utility assistant internship who attended the WOW event in eighth grade. He told the committee that what he learned at WOW played an important role in his pursuit of a career at Alabama Power.

“So there’s one person that we or another utility touched along the way, and it impacted their position, so I thought that was pretty cool,” Dean said.

A few days after the WOW event, Dean hit the “career circuit” again, bringing home Eufaula High School students the importance of career planning. Dean wants to steer young people interested in STEM (science, technology, engineering, and math) into exploring engineering work or power utilities, which will set them up for a promising career in a few years.

Dean’s message to students is to prepare for their future – the sooner the better.

“We find that when we reach out and engage with students at a younger age, they often aren’t able to look that far ahead, but at least they are able to mentally explore and compare tastes. and dislike,” Dean said. “It could sow seeds as to what their future career might look like.”

At WOW and during his visit to Eufaula High School, Dean sat down with the students and tried to “develop” the discussions to help them understand the myriad of opportunities the utility industry offers. ‘electricity.

“I’m very happy with the career I’ve chosen,” she says.

While growing up in South Carolina, Dean leaned towards the technical side, with math and science being his favorite subjects. His father graduated from Auburn University (then called Alabama Polytechnic Institute) with an agricultural engineering degree in 1953.

“I always looked up to my dad and he always encouraged my sister and I to get an education where we could support ourselves,” Dean said. “He was my encourager, and my mother too. I wasn’t sure which engineering discipline I wanted to go into, but I focused on electricity. Secretly, however, I want to be a mechanical engineer,” she added with a hearty laugh.

Along with family members in Ozark, she attended Wallace Community College in Dothan for two years. Dean followed in her father’s footsteps at Auburn University, often teaching students calculus until she graduated.

Dean’s great-uncle, Albert Smith, was one of Alabama Power’s first linemen. Born in Ozark in 1914, Smith worked in the business through World War II and beyond.

“Tradition holds that he hung the first Transformer on what is now Fort Ruckeras well as Napier Fieldsaid Dean, recalling the construction of the Dale County Aviation Training Ground, where the nation’s first military pilots began advanced training more than 80 years ago.

“I would give anything to be able to sit down with my uncle today and talk to him,” Dean added, looking wistful. “I would love to get a group of my foremen together and listen to my uncle talk about what it was like to work as an Alabama Power lineman in the 1930s through the 1960s.”

With this long family heritage, it’s no surprise that Dean is focused on training and developing future Alabama Power employees. In her current role, she hires and works with many up-and-coming utility assistants.

“As you grow in your career, you see the need to give back and see how important the mentorship component is for these young people who may already be starting out in their careers or still trying to improve. in this career,” Dean says. “Just being able to broaden their view of different career paths and inspire them to see beyond the immediate is very necessary.”

Dean is grateful for the many growth opportunities the company has provided. She worked in Power Delivery-Distribution in Tuscaloosa; in commercial marketing in the Birmingham division; completed a short rotation within Distribution Engineering Services at Head Office; held his first engineering supervisor position at Wetumpka; and was engineering supervisor at Montgomery, followed by Prattville, until she took her current position.

A longtime member of the company’s volunteer arm, the Alabama Food Service Organization (APSO), Dean has been involved in numerous community projects in the Wiregrass area. She enjoys doing Christmas shopping for older residents and helping with other projects for the APSO. Southeast/Farley Chapter.

“I have a heart for teachers, assistants and all those people who constantly give of themselves to help our children and other members of the community feel special, important and valued, as they are,” said Dean.

Two community events touch Dean’s heart: the Special Olympics and the Buddy Walk, where hundreds of people congregate at National Peanut Festival Fairground in Dothan to support people Down syndrome.

Dean’s son, Andrew Hamm, who was a student with special needs, competed in the Special Olympics. Supporting Andrew, now 25, was a family affair. Dean and his eldest son Joshua cheered on and congratulated Andrew after the track and field contest.

“I probably spent a little more of my APSO time on these types of events,” Dean said. “It makes your day. All sorts of things can happen at work and you get pulled in a million directions, but as soon as you walk into the Special Olympics bowling alley or attend an athletics day, you encounter children and adults delighted to see you and we are so excited to be there.

“It makes all of those things — those other concerns and anxieties — kind of go away, in the moment,” Dean said. “It’s a ‘time out’ and it’s really refreshing. They do so much more for me than I could ever do for them. It was great fun and I was glad I got to participate.

She finds real satisfaction in supporting a group of employees who invest in each other and in the communities they serve. Serving others “doesn’t have to be something grand,” Dean noted — it’s more about letting others know they’re not forgotten.

“Serving in the APSO is a great reminder of our company,” said Dean, “that it has given us such a phenomenal career and a way to support our families so well, and the need to be of good stewards of these blessings, to provide and help our communities.

Dean feels lucky to work in a job – and for a company – that makes a real difference to others, every day.

“I can truly say that I derive great satisfaction from the career I have chosen,” Dean said. “I couldn’t be prouder of our organization – lots of hard work and long hours. From a customer service and reliability perspective, the Southeast Division continues to rank extremely high – #1, in fact – in reliability.

“It takes a lot of daily pounding on the pavement to do what it takes to try to deal with this,” she added. “I couldn’t ask to serve alongside a more committed group of people, both for the success of our business but also to serve our community, where we consider our customers to be neighbors and friends.”